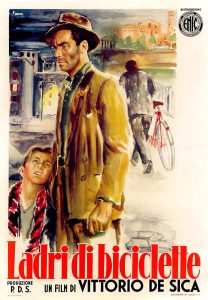 Hello IEGAP friends, For our next Film Club discussion we selected an Italian classic, “Bicycle Thieves”, directed by Vittorio De Sica. We hope you will enjoy watching it and will join us for a discussion on Friday, May 20, at noon. We are looking forward to seeing you on Zoom! Film title: BICYCLE THIEVES Join a discussion on Zoom Trailer: https://www.youtube.com/watch?v=Ax6eL_Rfv9g Available at Kanopy: https://www.kanopy.com/en/princeton/video/219410 (PUID required) Synopsis: Hailed around the world as one of the greatest movies ever made, the Academy Award–winning BICYCLE THIEVES, directed by Vittorio De Sica, defined an era in cinema. In poverty-stricken postwar Rome, a man is on his first day of a new job that offers hope of salvation for his desperate family when his bicycle, which he needs for work, is stolen. With his young son in tow, he sets off to track down the thief. Simple in construction and profoundly rich in human insight, BICYCLE THIEVES embodies the greatest strengths of the Italian neorealist movement: emotional clarity, social rectitude, and brutal honesty. About the director: Vittorio De Sica was an Italian film director and actor, a leading figure in the neorealist movement. Four of the films he directed won Academy Awards: Sciuscià and Bicycle Thieves (honorary), while Yesterday, Today and Tomorrow and Il giardino dei Finzi Contini won the Academy Award for Best Foreign Language Film. Indeed, the great critical success of Sciuscià (the first foreign film to be so recognized by the Academy of Motion Picture Arts and Sciences) and Bicycle Thieves helped establish the permanent Best Foreign Film Award. These two films are considered part of the canon of classic cinema. Bicycle Thieves was cited by Turner Classic Movies as one of the 15 most influential films in cinema history.